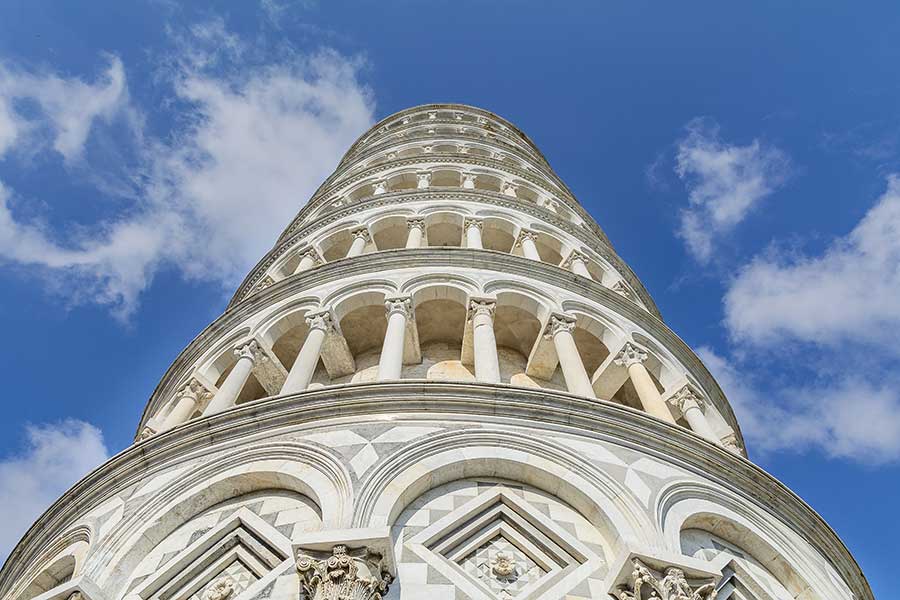 The Leaning Tower of Pisa is the most important monument in Piazza del Duomo. Built between the 12th and 14th centuries, the Tower leans because the land gave way in the early stages of construction. Designed by Diotisalvi, together with the Baptistery.

The Cathedral of Pisa, dedicated to Santa Maria Assunta, is the most authoritative example of Pisan Romanesque art, combining the classical tradition with elements of Norman, Byzantine, early Christian and Arab art, has given life to an original style that anticipated the Florentine Renaissance. The Cathedral testifies to the prestige and authority of the Maritime Republic, its construction began in 1064.

The Baptistery of Pisa, the largest in Italy, its construction, which began in 1153, is the work of the architect Diotisalvi, as many sculptures on the facade were made by Nicola Pisano and his son Giovanni. The external dome covers only the internal circle of the pillars probably due to lack of money and this is the reason why it is made of different materials

The Monumental Cemetery of Pisa seems to be a sacred place because the crusaders brought the holy land here from Mount Golgotha, just outside Jerusalem. Authoritative figures of Pisan history are buried in white marble walls that guard the tombs of the dead, currently all burials are under the arches. Lungarni are the streets that run along the Arno river, meeting points for young people and tourists, along the river there are important buildings dating back to the Middle Ages: Palazzo dei Medici, Palazzo Toscanelli and the Church of San Matteo. < / p>

The National Museum of San Matteo in Pisa collects works from the main ecclesiastical buildings of the city from the early Middle Ages to the sixteenth century, important works from the "Romanesque" period and the masterpieces of Nicola and Giovanni Pisano, Andrea and Nino Pisani, and Andrea della Robbia. More than two hundred paintings of Tuscan art between the sixteenth and eighteenth centuries and important evidence of illuminated manuscripts

Sinopie Museum located in a building initially used as a hospital and to host pilgrims; it was built in 1257 by Giovanni di Simone. Most of the sinopias on display come from the Monumental Cemetery moved to the museum following a serious fire following the bombings of the Second World War and to save and preserve the works and frescoes it was decided to detach them from the walls and put them on panels, in detaching these works numerous sinopias were found.

Chiesa della Spina The church originates from a small oratory built on the edge of the Arno in 1230 and took the name "della Spina" when the relic of a thorn from Christ's crown was placed inside it in 1333. above to avoid flooding and damage by the Arno Inside it is possible to admire the beautiful Madonna della Rosa by Andrea and Nino Pisano.

Bridge game The Gioco del Ponte is a historical festival, which takes place every year on the last Saturday of June on the Ponte di Mezzo in Pisa. Before the challenge between the districts of Mezzogiorno and Tramontana (pushing a trolley on rails towards the side of the opponent's bridge), the historical procession in sixteenth-century Spanish style takes place. The procession winds its way along the four roads that run along the central stretch of the Arno river.

Luminara The evocative illumination of San Ranieri takes place every year on the evening of June 16. The luminaria is a historical event within the Pisan June. According to an ancient tradition, Pisa celebrates, with this unique wax lighting of all the buildings in the central area that runs along the Arno river, the feast of the patron saint San Ranieri on 17 June, in the evening.